Posted on April 5, 2019 by abroadintheusa

In the 34 years I’ve lived in the USA, I’ve visited (i.e., spent at least one overnight) in about 30 of the 50 states, and my least favorite by far is Florida. Admittedly, I’ve only been there twice, most recently last weekend; and only to the southeastern coastal area that stretches from Palm Beach, through Fort Lauderdale, and down to Miami. But, those two visits were enough to convince me that the Sunshine State is a place where humans are just not supposed to live.

Florida is now the third-most-populous state (after California and Texas). In 1950 there were just 2.7 million people living in Florida; by 1990, thanks to the widespread adoption of air conditioning, that number had jumped to about 13 million and by the 2015 census it had reached 20.3 million. This number of permanent residents does not include the numerous “snowbirds,” retired folk who spend the winter months (roughly October through the end of March) in Florida and in the summer head back to New York, Pennsylvania, New Jersey, etc.

So, what is it about Florida I so dislike? Let’s start with the weather. In March, it’s actually very pleasant. You can enjoy a cocktail outdoors at a beach-side restaurant at 10 o’clock at night (recommended). You can sit outside on a balmy morning, sipping coffee in the lovely little courtyard of a bed-and-breakfast (also recommended). 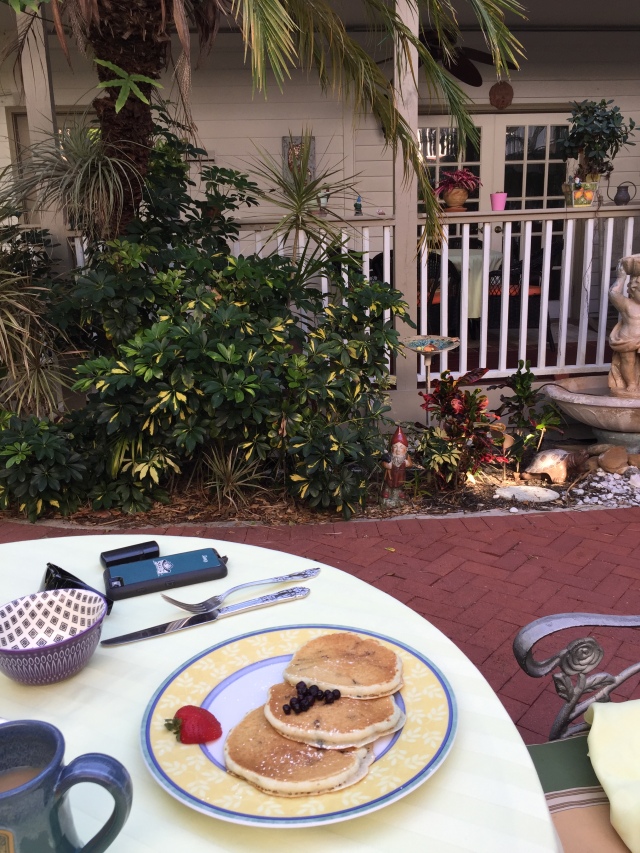 Yes, the various, lush tropical flora can be lovely—this was the view from our window at the aforementioned B&B recently. 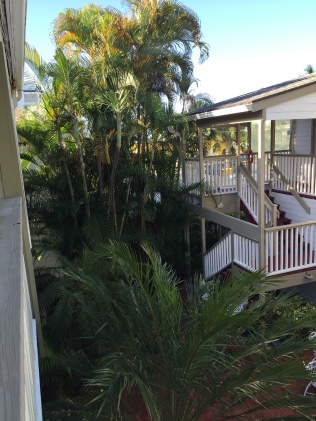 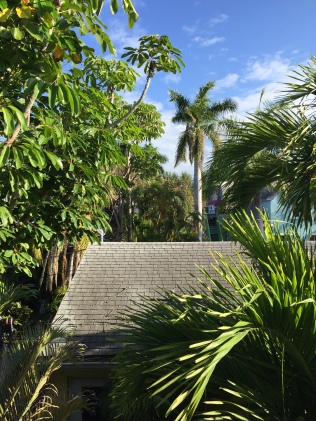 But, all that tropical lushness comes with one of my personal pet peeves—mosquitoes. On our first visit to the area about ten years ago, we stopped in to see an aged relative living in a senior facility in Boca Raton. She warned us that, “We can’t go to the pool area today because they just sprayed for mosquitoes and the kids shouldn’t go around there.” So, you get to choose between noxious chemicals and noxious disease-carrying bugs. Hmm. (Again, humans are not supposed to live there).

The central part of Florida is, basically, one big swamp. If you look at a map, you can see the area is chock full of lakes, streams, and ditches, all of them breeding grounds for mosquitoes—also, alligators. Ten years ago, we took a memorable “swamp tour” around the Big Cypress Seminole Indian reservation in the southern Everglades. Even in December, the swamp was a bit steamy—we were warned to be generous with the bug spray before the tour started. And yes, we saw plenty of alligators, blessedly sluggish as the weather was cooler by Florida standards that day. But still: mosquitoes and alligators? (Did I mention, humans are not supposed to live there?)

I suppose mosquitoes and alligators are only doing their thing, live and let live, etc. Worse is what humans have done to the southeastern coast. In the words of Joni Mitchell, “They paved paradise, put up a parking lot.” More specifically, they put up endless condos, hotels, gated communities, and strip malls, all linked by wide roads and highways. 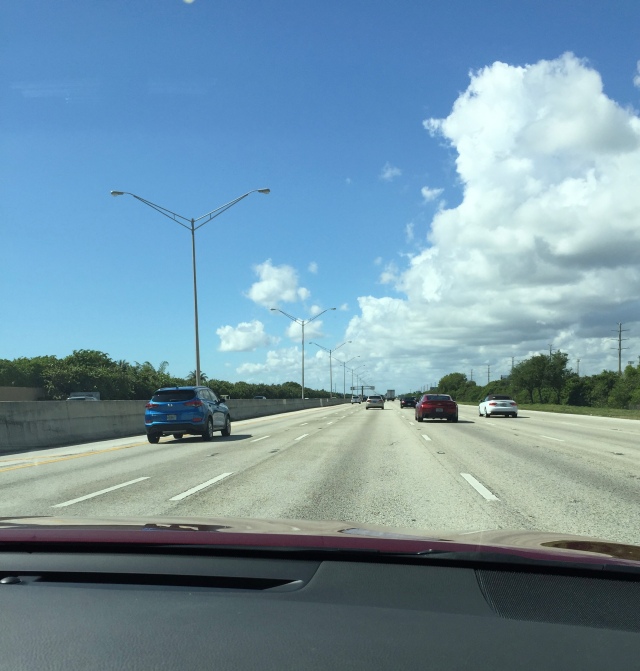 This is I-95 heading south from the Palm Beach airport towards Boca, and the inside of one of those gated communities. 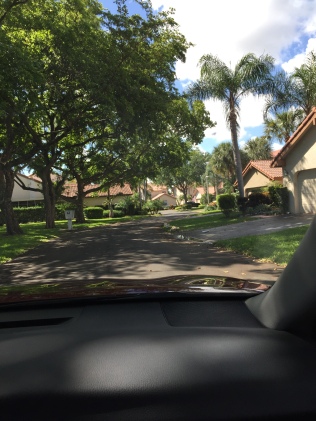 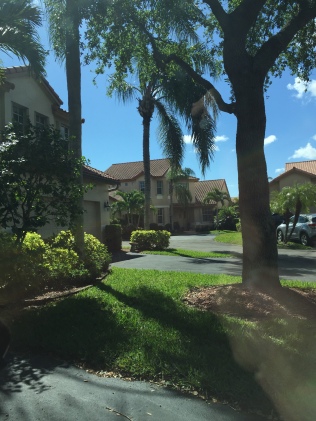 We recently spent a few days in Lake Worth and Boca Raton dealing with Family Stuff. One evening we saw street signs pointing to “Town Center Boca Raton” and figured we could find somewhere to eat there, maybe spend a pleasant evening strolling around? Nope. Turns out “Town Center” is just the name of a large shopping mall with 200+ stores. There is no ‘town center’ in Boca.

And the drivers on those endless highways? Unbelievable. Which is another way to say, downright crazy. I’m not just talking about the kind of aggressive driving you see in NY or Boston; nor am I talking about one or two idiots weaving around the lanes on a highway. No. I mean, at least half the drivers acted like other cars were just a personal inconvenience; so, cutting off other drivers, swerving across lanes, and making a right turn from the far-left lane on a four-lane road were all perfectly acceptable. It was actually a pleasant surprise if someone used their indicators/turn signals. We quickly figured out that whatever was the most bonkers and least safe thing to do, someone would do it.

One local told me it’s all those snowbirds and tourists who don’t know where they’re going that makes the roads so crazy. I’m not convinced. In fact, Floridians are just crazy in general—and it’s not just me who thinks so. Comedian/commentator John Oliver did a segment on his show a few months ago on the strange fauna that is “Florida Man.”

Here are a few headlines from a recent piece in Esquire  on ‘The 90 Wildest Florida Man Headlines of 2019 (So Far)’:

You get the idea. On the recent trip, I was chatting with the young man working at the FedEx office near Boca. He was a Florida man himself, born and raised, and he groaned when I asked him about the crazy Florida man headlines: “It’s all true,” he said, “Florida guys are just awful.” Maybe it’s a form of cosmic revenge because people are not supposed to live in Florida?

Away from the God-awful strip-mall-and-condo nightmare of the southeast coast, Florida looks very different. Not just the whole swamp thing, but the neighborhoods and the people. Less white, less wealthy, and a whole lot more interesting. Ten years ago, we spent a day in Miami and around the South Beach area—vibrant, colorful, and full of energy and great food. Back in Lake Worth this time around, the only thing that was vibrant and colorful was the annual Gay Pride Parade that was held the weekend we were there. (Some of the other guests at the B&B asked if we were in town for the boat show, the derby, or the polo event—I really wished I’d said, “No, we’re here for the Gay Pride festival,” just to see their reaction.)

Towards the end of our recent trip, in desperate need of some cheering up, we looked for nearby movie theaters and to my delight, we found a drive-in. 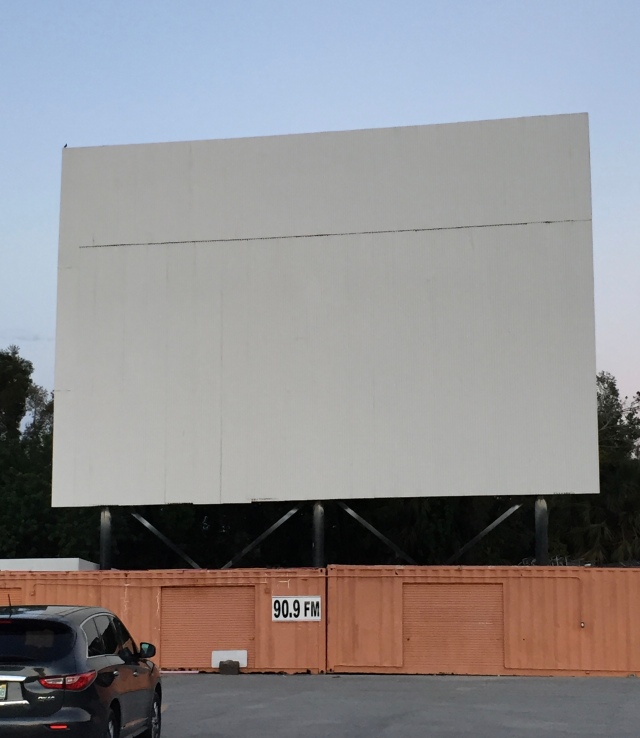 I’d never been to a drive-in movie before—they used to be ubiquitous across the States but are now few and far between. This one was about ten minutes due west from the Lake Worth coastal area, a huge gravel parking lot with one screen at the front and one in the back. We loaded up on take-out snacks and drinks; then, for the princely sum of $7 each, we parked our rental car in front of the screen for the movie we wanted to see (and we could have turned the car around later on and parked in front of the second screen, too, if we wanted to spend the whole evening there). 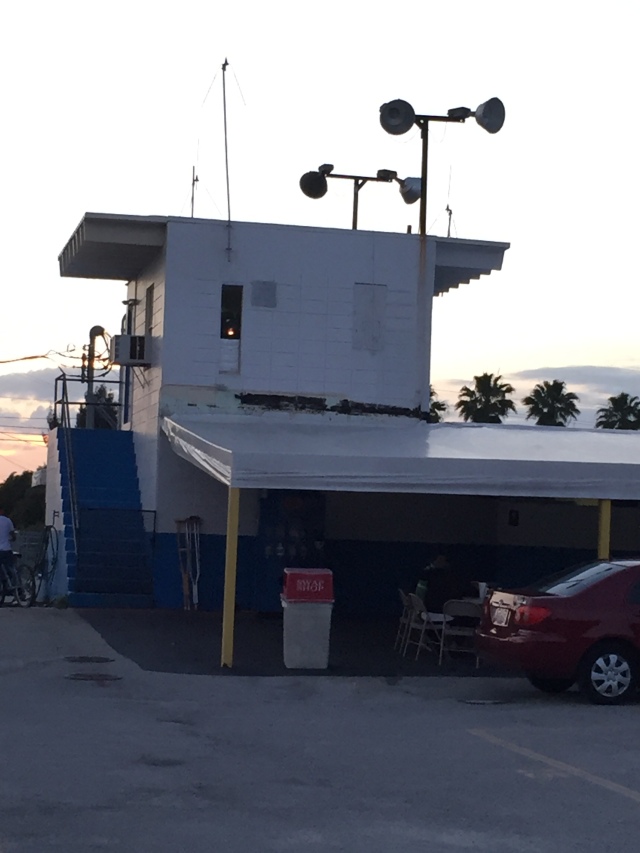 You can just see the light of the projector in the little tower of the taqueria that sat in the corner of the lot.

We tuned the car radio to the frequency on the sign, sat back, and enjoyed Captain Marvel. The picture quality was way better than this fuzzy shot and we quickly forgot that the sound was just coming from the car radio. 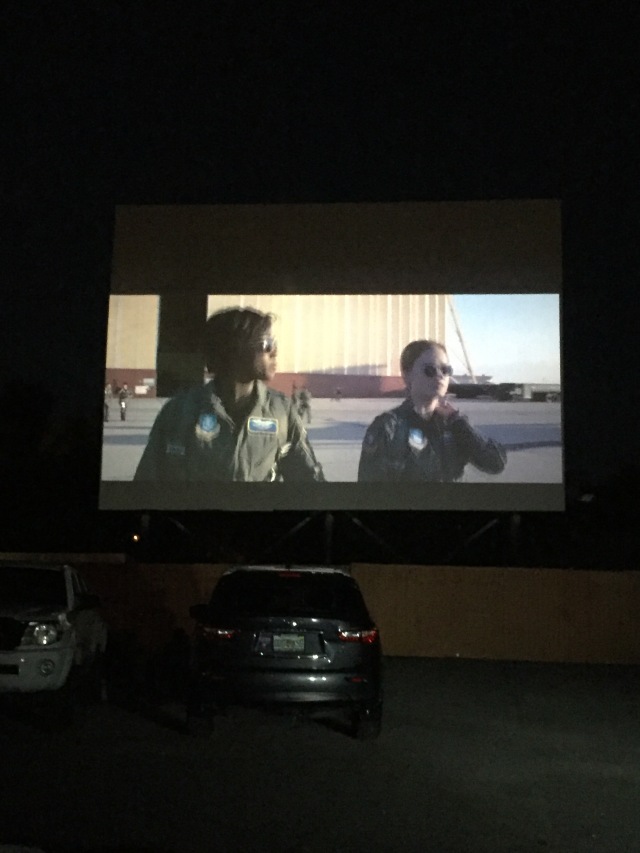 Sister-in-law moved to Fort Myers, on the west coast of Florida, a couple of years ago. She insists that it’s not like the Palm Beach area at all but has more of a college-town vibe, and she claims to have only seen one alligator in two years. I’ll give her the benefit of the doubt and may even pluck up the courage to go visit her soon.

In the meantime, if you’re ever unfortunate enough to have to spend a few nights around Palm Beach, we strongly recommend this place: Sabal Palm House. It’s a lovely little adults-only B&B with rooms full of antiques and artwork, delicious breakfasts, and a great welcome from the owners, Colleen and John.

An expat Brit who's lived and worked in the USA for more than three decades.
View all posts by abroadintheusa →
This entry was posted in Uncategorized and tagged AmericanLife, BocaRaton, ExpatLife, Florida, Snowbirds. Bookmark the permalink.

1 Response to About Florida