Posted on January 30, 2017 by abroadintheusa

I am an immigrant. My story is not unusual; it did not involve any danger, heartbreak, or difficult decisions. As a straight white woman with the “right” kind of accent, my journey from student to green card to naturalized citizen was straightforward. But sometimes it was also downright nerve-wracking and for one brief 30-second interlude mind-numbingly terrifying. Most Americans say the IRS (Internal Revenue Service, the federal tax authority) is the scariest government institution. I think most immigrants would agree, it pales in comparison with the INS (Immigration and Naturalization Service).

Here in Philadelphia, the local news is focusing a great deal on two Syrian refugee families who were turned away from Philadelphia International Airport on Saturday morning, despite having all the valid paperwork and approvals to emigrate to the States. This was thanks to the new President’s Executive Order barring arrivals from seven countries, including Syria. Their nephew told the local media of waiting eagerly at the airport with other family members for his uncles and their families, only to suddenly be told by customs officials that there was no point in waiting as they had been sent back. (Oh, and they had to pay for their return plane fares, too.) I can barely imagine the horror, the helplessness, and yes the rage, that this family must be going through.

Like I said, my own story is very different. I first came to the States in 1985 on a student visa. I applied for this at the American embassy in London, which involved a day of standing in lines and filling out forms (this was pre-internet). I remember at one point having to promise that I was not, and had never been, a member of, or a sympathizer with, any Communist or Nazi party or organization.

The student visa, stamped into my passport, allowed me to enter the US, to study here, and to get certain forms of work that were pre-approved by the University. That’s how I paid the bills and ate during the three-month summer break; I variously worked answering phones at the university student housing office, checked out books at the university library, and did some paid research work.

In 1990 I married an American citizen, and set about applying for a green card. This is the Permanent Resident Card that authorizes you to live and work in the States. I would need one if I were to get a job after graduating. Again, hours of filling out forms, gathering documents, and waiting in various offices. I remember the “final” approval interview, when the spouse and I had to appear at the INS offices in downtown Chicago.

This was about the same time as the movie Green Card came out (a forgettable romantic comedy starring Gérard Depardieu and Andie MacDowell). In the movie, they are grilled about all sorts of minutiae to “prove” that their marriage is legitimate, even down to Depardieu’s character being asked what kind of toothpaste his wife used. I remember perching anxiously on a plastic chair in an anonymous waiting room and suddenly turning to my husband and asking him: “Do you know what kind of toothpaste I use?” Naturally, he didn’t have a clue.

When we were finally ushered into a tiny little office, the bureaucrat on the other side of the desk was utterly humorless. But the actual interview ended up being brief to the point of perfunctory. It wasn’t until it was all over that I found myself imagining how very different the day would have been if I weren’t a white woman with an English accent.

A few weeks later the coveted Green Card arrived in the mail. It was actually a disappointingly small piece of plastic, the size of a credit card, pale pink in color, with my name, picture, and details printed on the front, and an alarming black strip on the back with a long list of letters and numbers printed underneath. My entire life, summed up in those numbers and letters, with who-knows-what data embedded in the black strip.

From that point on, when I applied for work, or whenever I left the country, I’d carry the little pink card with me, serene in the knowledge that I was a Permanent Resident. The only drawback I could see to not being a full citizen was that I could not vote. Otherwise, to all intents and purposes, I felt like I belonged. Occasionally I’d wonder about citizenship, especially after our first child was born, but I (mistakenly) assumed I’d have to renounce my British citizenship, which I was not prepared to do.

But then came the 30-second interlude of mind-numbing terror. This was the early summer of 1999. I’d been on a ten-day business trip that took me from Philadelphia to Singapore (by way of Amsterdam), on to Hong Kong, and then back via San Francisco. I literally circumnavigated the globe. By the time my plane landed in SF on Saturday morning, I was so jet-lagged out of my skull I didn’t even know what day it was, let alone the time. I was also feeling rather ill (it later turned out I was in the early stages of pregnancy with son #2).

I stumbled up to the Border Control desk at the airport, and handed over the British passport and Green Card. The agent stared long and hard at my Card, then looked up, leaned forward and sternly said, “Do you know how long you’ve had this?”

I was paralyzed with terror. Oh my God what have I done wrong? Has it expired? My husband and (US-born) child were on the other side of that barrier — would I ever see them again?

After what felt like an eternity but could only have been a few seconds, he said, “You’re eligible for citizenship! Why haven’t you applied yet?” Still scared witless I stammered something about “Been meaning to…” He handed me back my precious little pink card and said, “Well see that you do, young lady, see that you do. We need people like you!”

I staggered past his desk into baggage control and collapsed on the nearest bench, near-weeping with relief (remember: jet-lagged and pregnant, not a good combo). It wasn’t until much later that I wondered if “people like you” was really as creepily exclusionist as it sounded, or if he was just trying to be nice. But it worked: I set about figuring out citizenship in earnest.

Once I realized that the INS wouldn’t actually demand that I physically hand over my British Passport — and that Her Majesty’s Government couldn’t care less how many additional citizenships I claimed — the decision was easy. The year after #2 son was born, I applied for citizenship.

Once again, forms, documents, paperwork — and a written test! I dutifully studied my list of 100 sample questions. Some were laughably easy: what American holiday commemorates the first meal the pilgrims shared with native Americans? Others I did have to look up: who is currently the chief justice of the Supreme Court? This part of the whole process was a little anxiety-provoking but I wasn’t particularly worried about the outcome. I also had a rambunctious six-year-old and a toddler running around; who had time to worry about the machinations of the government bureaucracy?!

The process took a little longer than usual because right after I applied, 9/11 happened. Still, I was stamped and approved and told to appear for my swearing-in ceremony at a courthouse in Philadelphia in mid-January, 2002. We got permission from the school for the six-year old to come along, figuring it could be an important learning moment for him. In the event, while he did try very hard to be good, the stuffy and crowded room full of strangers didn’t impress him in the least. But for me, the whole morning was profoundly moving.

The judge told us there were about 80 of us becoming citizens that day, from over 60 different countries. I remember a young woman from West Africa, who was crying tears of joy and hugging everyone she saw. An elderly Laotian couple, bent double, escorted to the front of the room by a solicitous grandson who helped them sign their names. A tall, middle aged Indian woman, regal in a beautiful sari, and utterly serene until her name was called and she broke into the most radiant smile. A young French man, trying his hardest to be cool and diffident while his American wife wept and snapped photos.

It was America at its most gloriously diverse and its most powerful best. Every single one of those people had a story — and you could tell that for many of them, this day marked the culmination of a long and harrowing journey. Most of us were in tears by the time we all stood to say the Pledge of Allegiance for the first time. I was bursting with pride.

The final part of the day was when we returned the six year old to school. My husband insisted I needed to walk him into the classroom. When we opened the door, 20 six-year olds were sitting at their tables, with little American flags in front of them, and they all cried out “welcome.” It turned out that the teacher had found out why our son would be absent from school that morning, and decided to turn the event into a civics lesson for the kids. We got to share red-white-and-blue decorated cupcakes, and I had to try very hard not to cry all over again.

Each student in the class had decorated a flag that the teacher made into this wreath (it still hangs on the wall of my office). And each of them also wrote a sentence in a little booklet about why they were proud to be Americans. Some said things like “because my grandpa got to come here.” Many said “because of the firefighters” (this was just four month after 9/11). 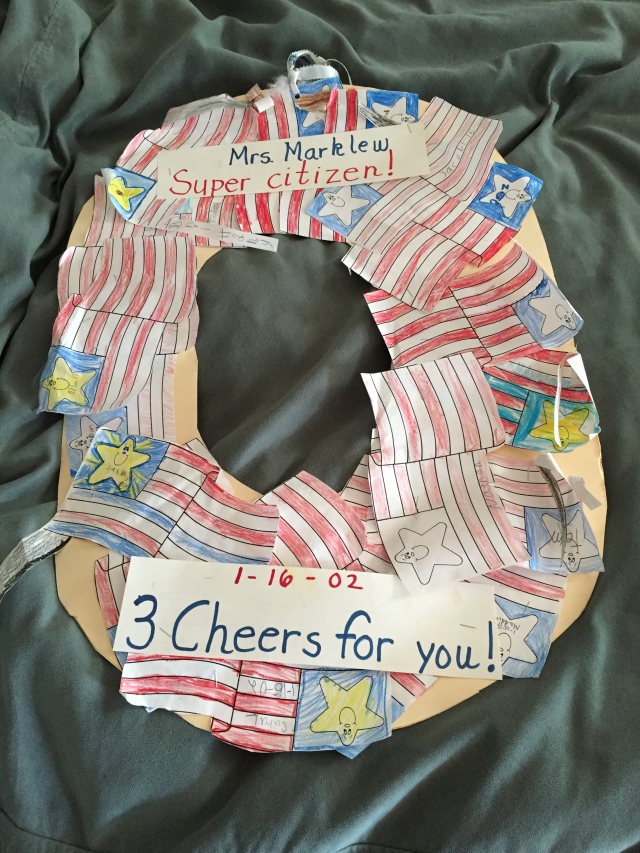 May every one of those refugees and immigrants so cruelly turned away this weekend eventually be admitted. Because while they need the sanctuary and prosperity that this country offers, America truly needs them.

An expat Brit who's lived and worked in the USA for more than three decades.
View all posts by abroadintheusa →
This entry was posted in Uncategorized and tagged American life, Expat Life, Green Card, Immigrant, US Citizenship. Bookmark the permalink.