Posted on April 1, 2020 by abroadintheusa

So, on the surface the leafy-suburbia version of the apocalypse turns out to be a rather mundane affair involving furious debate on the community Facebook page over whether it’s still OK to use the school playing fields (hint: it isn’t) and a strange obsession with toilet paper and paper towels (because both of those items have been essential to human survival for millennia?).

Even so, there are true horror stories coming out of New York, Florida, and mental health institutions and prisons everywhere. A friend who lives on Cape Cod notes that the usual influx of New Yorkers moving out to their summer homes has started very early. (“We have one small community hospital here with only a couple of beds, what happens if people get sick?”)

The lockdown—announced for the whole of southeastern Pennsylvania just hours after my last post—is finally, slowly, taking hold. The grocery stores are still open; neighbors complain online that there are used medical gloves scattered all over the parking lots. I haven’t been shopping since the 18th but apparently our local Acme supermarket has taped X’s on the floor marking where people should stand at the various counters, arrows indicating a one-way system around the aisles, and plastic shields to protect checkout workers. Not a coincidence that this particular Acme branch is also unionized. A number of the local restaurants have closed but about half are still offering takeout.

Covid-related ads are starting to pop up on the TV, which is kind of surreal; mostly from restaurant chains boasting about their “zero-contact” takeout options. Most worrisome, layoffs are starting to take a toll across the state—Pennsylvania has reported the sharpest ever surge in unemployment claims in the last two weeks of March—and our local food bank is seeing a record demand for help.

And yet, when I ventured out on the 28th to pick up some takeout for dinner, there were still a surprising number of cars on the road—less than usual at 6:00 p.m. on a Saturday evening, but certainly not the deserted streets I’d been expecting. And just yesterday the lawn care company came by and gave our grass its first mowing of the season; landscaping contractors are considered “essential”, which I guess is good for the workers but seems kind of an odd decision.

Wild goats are coming down out of the hills to roam the streets in Llandudno, dolphins have been spotted in Venice, and hungry monkeys are going on the rampage in Thailand because they can’t score food from tourists. Maybe the traffic still on the roads around here is the only thing stopping hordes of bears from venturing out of their lairs in the Pocono mountains to ravage the trash cans of suburbia?

Which may explain why the chair of the County Board of Commissioners Val Arkoosh—a doctor, who has been a voice of calm reason and fact in near-daily media briefings—issued a decidedly testy message on the 30th. Noting that there had been a marked jump to just over 500 tested-positive cases in our county over the past week, and 6 deaths, her statement concludes:

“There are now six families grieving the untimely loss of their parent, grandparent, husband, or wife. Many more families in our community will experience this tragedy if you don’t take steps right now to stop the spread of COVID-19. You must stay at home except for life-sustaining activity. By leaving your home today for any unnecessary reason, you are taking someone else’s life in your hands. Even if you feel fine, you could unknowingly transmit the virus to someone else. Your carelessness could kill them. Is that trip to the store worth it? Is seeing your friends in person worth it? Make the right choice. Stay at home.”

That was two days ago. This morning’s tally on the county tracking website is 8 deaths and 564 positive cases, and no doubt it will have jumped higher in this evening’s update.

Everywhere there are stories about private companies and institutions stepping up to organize medical supplies and protective gear. Younger Son’s university did an Instagram story last week describing the boxes of stuff they’ve been putting together for donation: masks and gloves from the biology labs; adapted protective gear from the athletic departments; and masks and gowns sewn from surplus stuff in the theater costume department. There are also reports of private organizations setting up field hospitals and some cities trying to adapt convention centers and sports venues for non-intensive hospitalization.

But it’s all very ad hoc. Because the reality is that there is no national healthcare coordination in this country—unless it involves regulation of drugs and corporate pricing. Even at the state level, any coordination is fractured because all the facilities and networks are essentially privately owned. I assume the various hospital networks are communicating to try to figure out who has what resources, but there is nothing like the national coordination seen in the UK via the (flawed but essential) NHS.

Note the sharply rising bright pink line in this graphic from the Financial Times. Yep, that’s the best-in-the-world US of A. And these are just the reported tested-positive cases.

Of course, there could have been national-level coordination via the CDC (Centers for Disease Control) and the pandemic response team at the National Security Council—but the former has seen its funding slashed and the latter was disbanded two years ago. Trump did not create Covid-19 but the staggeringly incompetent and venal actions of his government over the past three years have certainly ensured that way more people will die because of it.

And a number of state Governors are refusing to order strict containment measures, essentially saying, “We’re not like New York or California and the president says it’s not necessary.” Yes, they’re all Republicans. The list includes Alabama, Mississippi, Oklahoma, South Carolina, and South Dakota – and Florida. Yes, Florida. The state where thousands of college kids were partying on the beaches just two weeks ago and the state with a disproportionate number of retired folks. Wonderful. 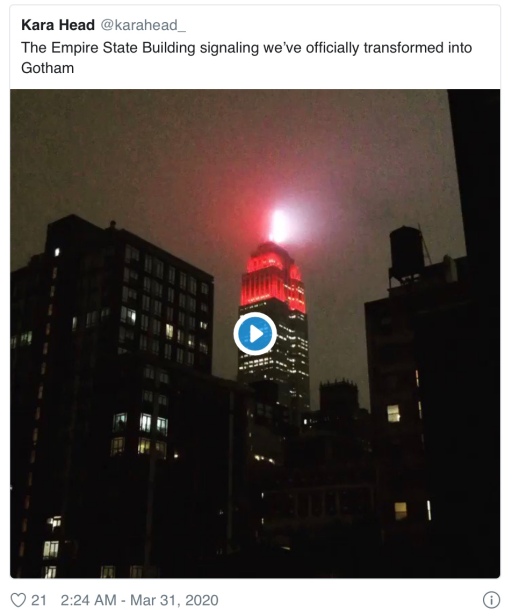 So, it’s left to the likes of county-level elected officials to remind us that we’re all in this together, along with New York’s Empire State Building, which sent out this tweet on the 30th:

“Starting tonight through the COVID-19 battle, our signature white lights will be replaced by the heartbeat of America with a white and red siren in the mast for heroic emergency workers on the front line of the fight.”

As for me, the biggest challenge right now is keeping three adult males fed. A few days ago, I baked bread for the first time in many years (25? 30?). I used a recipe from blogger Autumn Ashbough called Shaker Bread. You can find it here.

Got to admit, I’m pretty proud of how well these loaves turned out. Unfortunately, they were both gone in less than 36 hours, and I only have enough yeast for two more batches.

A few hours after posting the above, I decided to make an excursion to the above-mentioned local supermarket; what I found was horrifying. I can’t remember the last time I have felt that scared when out and about in public.

Yes, the store had installed shields at the checkouts and markings on the floor to aid in distancing and yes there were plenty of disinfectant wipes at the door. But none of that helped because almost no-one there–and the store was pretty crowded–paid any attention.

*No-one else I saw wiped down their cart.

*Lots of shoppers were wearing a medical-style mask and/or gloves–but that just made them more lazy. Did they not realize the problem with touching every thing on the shelf while play with their phones, before choosing their one item? And come to think of it, unless they were all front-line workers or immune compromised, why were they wearing that protective gear and not donating it to a nurse who really needs it?

*There were whole families there with 3-4 kids, one whose kids were romping around as if in a playground.

*I got sneered at for carefully using a disinfectant wipe to open a fridge door to pick up milk.

*I had one guy push past me, literally knock into me, all annoyed because I didn’t want to get within a couple of feet of someone else just so Mr Oblivious-And-Entitled could get where he wanted to go 30 seconds faster.

*And finally, there were discarded wipes all over the store floor and a lot of masks, gloves, and wipes littered around the parking lot.

I saw maybe two other people who seemed to know what they were doing (virtual hugs to both of them). The rest? Honestly, I despair.

An expat Brit who's lived and worked in the USA for more than three decades.
View all posts by abroadintheusa →
This entry was posted in Uncategorized. Bookmark the permalink.

3 Responses to Life Under Lockdown