Posted on July 3, 2017 by abroadintheusa

Tomorrow is America’s birthday, which means three things will be ubiquitous across the country — flags, hotdogs, and fireworks.

Back to the current day. The first thing you notice as July 4 approaches is that the flag starts to appear — everywhere. Americans cheerfully wave the physical flag far more often than Brits. The only time I can remember the Union Jack being plastered all over people’s houses and various buildings back when I lived in the UK was at the time of the Queen’s Silver Jubilee in 1977. (There was a similar outpouring of flag decorating at the 2011 royal wedding, followed by the Queen’s diamond jubilee in 2012, and around the time of the London olympics that same year.)

The rest of the time, aside from some ironic t-shirts at the height of the punk era in the late ‘70s, overt public displays of the Union Jack in the UK are pretty much limited to fringe right-wingers. But not here. Many people put out Stars and Stripes flags at various times of year (Memorial Day, Veterans’ Day) and in the week leading up to the 4th the shops are full of flags, large and small. Many of our neighbors will be hoisting the flag on their own porch flag poles — the same poles that fly pumpkin-decorated motifs at Halloween, snowmen images at Christmas, and flowers, shells, or pictures of flip-flops (yes, really) as summer gets underway. This Alamy stock photo gives you an idea of what I mean.

For a real explosion of flag mania, you can’t beat the annual parade put on by most towns and cities across the country, usually led by local dignitaries followed by some floats from local businesses and other organizations. Interestingly, overt political displays or any partisan lobbying is Not Done. It’s the one time of year when no-one wants to see a banner advocating for/against anything. It’s all about the United part of the name USA. The Philadelphia parade lays claim to the city’s historic importance in all this, with period costumes and Independence Hall as a backdrop. 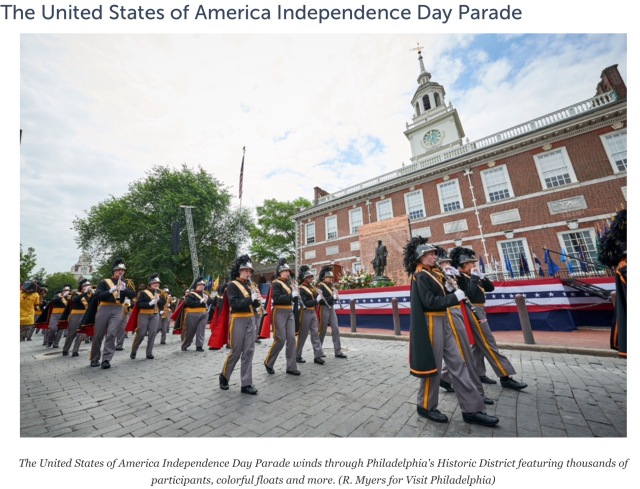 Our own little town has its own quirky take on the parade — after the local dignitaries, fire trucks, and band, the kids get to join in. There’s a competition for the best decorated strollers and wagons, tricycles, and bikes. (I swiped the picture below from the web to give an idea of how far some people go in this.) When our sons were young we spent many a July 4 morning attaching flags and streamers and other decorations to their bikes (having forgotten to get anything in advance and having to wing it at the last minute), then walking beside them as they proudly peddled around the town. They never won, but it was great fun. 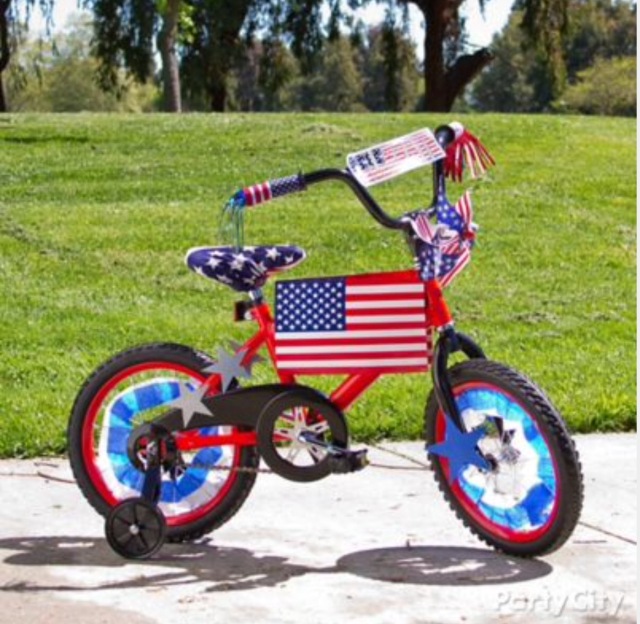 Which takes us to the food. There are countless fabulous food options in this country, reflecting the incredible diversity of its population. But hotdogs are the second key ingredient of any 4th July celebration. At the end of our town’s parade everyone gathers in the town square for hotdogs courtesy of the fire company. Across the country, in back gardens and public parks, families will be firing up the grills for cookouts large and small. This means hotdogs, burgers, and pretty much anything else that can be cooked over an open flame. And beer. Lots of beer.

As a vegetarian I can’t really opine on the best way to eat a hotdog (I’ve never been a fan of those tofu-based ones that are like tasteless rubber). Some combination of onions and/or relish (pickles) and/or mustard seems to be standard. But however you like your ‘dog, best not to ask what the thing itself is made of. 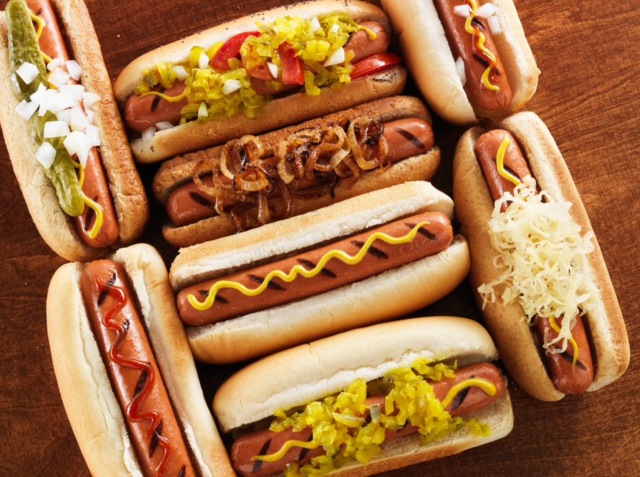 Light up the Sky!

Which takes us to the final essential component of the 4th of July — fireworks. Here in Pennsylvania you cannot buy ‘aerial fireworks’ without a permit (although there’s apparently a state law loophole that makes acquiring a permit pretty much as simple as downloading a form from the web, which explains some of the noises we’ll be hearing tomorrow night); but in other states you can buy almost anything. Hence displays like this one at a Walmart in Indiana.

And yes, there will be news reports from across the country on the 5th about people losing fingers, eyes, and sometimes more, as a result of backyard firework accidents. Go figure.

For those less pyrotechnically inclined, there are plenty of public firework displays to go to come sundown. Our neighboring township puts on a great display every year and of course Philadelphia itself goes all out.

An expat Brit who's lived and worked in the USA for more than three decades.
View all posts by abroadintheusa →
This entry was posted in Uncategorized and tagged 4th of July, American flag, Fireworks, Hotdogs, Independence Day, philadelphia. Bookmark the permalink.

1 Response to 4th of July: Flags, Hotdogs, and Fireworks!