What’s with Americans and tipping? It’s one of the odd little quirks about this country that I still find baffling. You’re expected to tip not just the restaurant server but the guy at the bar, the hairdresser, the cab driver, the hotel porter (actually, everyone you encounter who works in a hotel); even the garbage workers and newspaper deliverers leave envelopes for “holiday tips” in December.

Tipping is totally embedded in pretty much any service interaction here. The standard at a restaurant is 15%, with more for “good” service. If you’re paying by credit card, there will be a line at the bottom of your bill (which is called, confusingly, the check) for you to add the tip. Some places even have handy little calculators printed at the bottom of the credit card slip to help you figure out what 15-20% of your bill comes to. 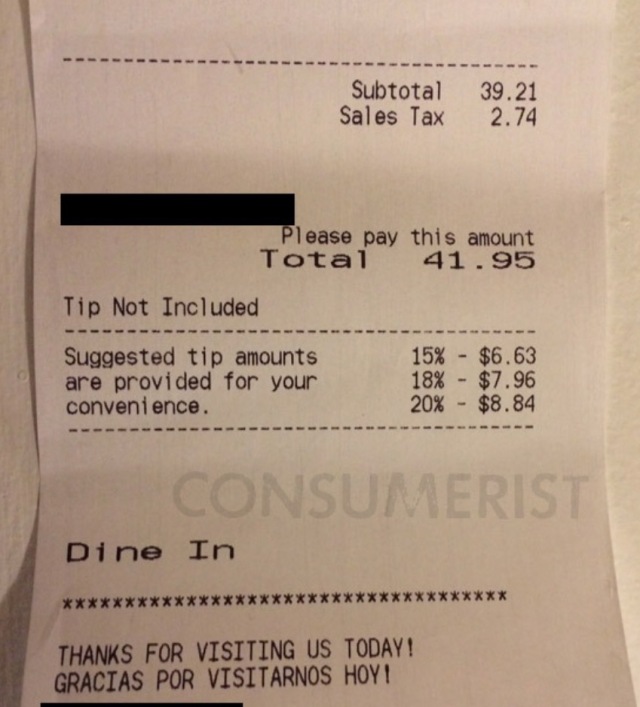 If you go to use the credit card machine in a cab, they usually now include a stage in the process where you stipulate the size of tip you want to add (and in my experience this defaults to 20-25%, which can feel downright extortionate — unless you’re traveling on the corporate expense account in which case, why not?!) 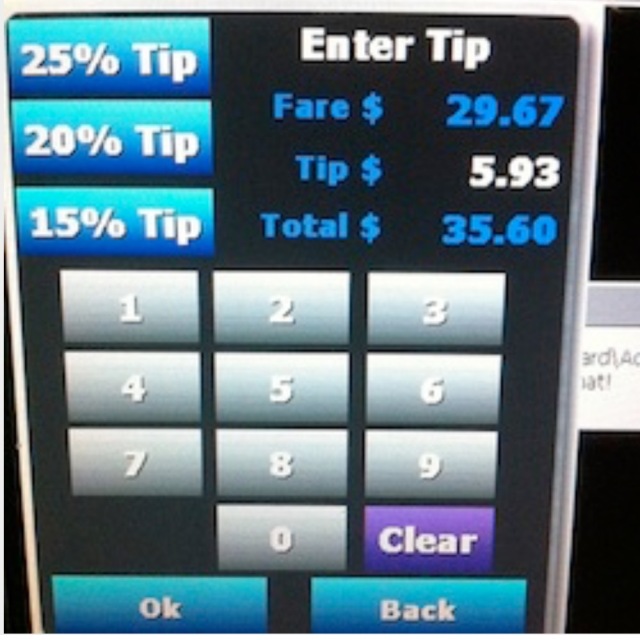 The only time I ever got a tip when working in the UK was when I was a student and working part-time in a big London department store, as a server at an “American Style Ice Cream Counter” (yes, really, the irony does not escape me). A young mother who spoke little English stopped by with her son, who gleefully pointed to the biggest sundae on the menu, a colorful concoction that cost about 3 pounds and came complete with red-white-and-blue sugar sprinkles and a little American flag decoration. When she gave me a 20 pound tip I assumed she’d made a mistake and tried to explain that this was too much, but she laughed and insisted, indicating that I had a nice smile and had made her son very happy. Needless to say, that 20 quid went right into my pocket, not into the near-empty shared jar where we were supposed to put any meager “tips” we received. (It wasn’t until later that it occurred to me that a woman who appeared Arab, judging by her clothing and head scarf, may not have been used to getting friendly service in 1984 London, but that’s another story.)

Anyway, back to the States: why is tipping so prevalent in this country? Are Americans such generous people that they’re willing to fork over extra cash to anyone who does a good job? Well, no, not exactly. Some cursory online research suggests tipping actually took off in this country during Prohibition — definitely not one of America’s finer moments — when bar owners struggling to make any money encouraged tipping to help their beleaguered staff makes ends meet. Whatever the origin, it’s now actually enshrined in the labor laws in many states; which means that businesses are allowed to pay their staff less than the state minimum wage in jobs deemed to be partially-dependent on tips for their pay.

Given that most wait-staff in most restaurants work incredibly long hours for very little money already, this can be downright exploitative: “It’s not my fault you didn’t take home much money tonight, you should’ve worked harder and gotten bigger tips.” It also means the wait-staff take the brunt of any kitchen screw-ups that leave the punters less than happy. Doubtless restaurant owners will claim they couldn’t afford to stay open if they had to pay all the staff minimum wage, but I find this hard to (pardon the pun) swallow. If paying your workers minimum wage means you can’t stay open, then there’s something very wrong with your whole business model. And I can’t be the only person who would go out of their way to patronize any establishment where tipping was off the menu.

Either way, for Americans it’s automatic. So what happens if you fail to tip appropriately? The first (and only!) time I was guilty of this was not long after I first came to the States. Then-boyfriend and I were at a club waiting for the band to start up (Gil Scott Heron, I think). It was one of those places where you sit at a little table in the smoky darkness and a waitress brings your drinks. The young woman told me the total and I carefully gave her the exact amount, thinking I’d made life easier for her by not forcing her to scramble to find change. I got the iciest glare imaginable as she stalked off; the boyfriend recoiled in horror and hissed, “Why didn’t you tip her?” He then explained about the 15% rule and I just about passed out from shame. When the same waitress grudgingly delivered a second drinks order sometime later, I over tipped so massively out of embarrassment that I think our table got the best service for the rest of the evening. 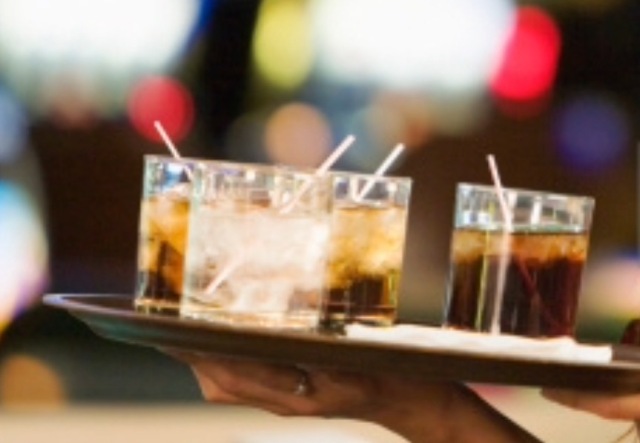 Such moments make the whole tipping expectation excruciating for a Brit. We absolutely cannot bear to Do The Wrong Thing in public. So I still go into paroxysms of anxiety every time I go to get my hair cut, take a cab, or have a porter carry the bags to a hotel room. And probably continue to over tip massively as a result.

An expat Brit who's lived and worked in the USA for more than three decades.
View all posts by abroadintheusa →
This entry was posted in Uncategorized and tagged #tipping #expatlife #americanlife #restaurantetiquette. Bookmark the permalink.

1 Response to Tipping in America