Posted on October 11, 2017 by abroadintheusa

I haven’t written much on here in recent weeks, in large part because each successive news cycle seems to bring some event so devastating that I just don’t know where to start. But first, I should make it clear that all is fine in our cozy little corner of Southeastern Pennsylvania. Here, the most arduous challenge right now is negotiating the thousands of acorns strewn across the sidewalks when out walking the dog. And in a way that makes the recent news all the more dystopian, a feeling that we’re living in a safe bubble while the world around us falls apart.

First came the hurricanes. There’s a season for these every year, a roughly eight-week period when hurricanes are most likely to hit along the eastern side of the continent. Back in August the forecasters were warning that this would be a bad season, with Atlantic waters “unusually warm” and no sign in the Pacific of the periodic El Niño (which tends to temper the eastern storms). They were horribly right.

The USA is a migratory country; as people move around from state to state, they leave family and connections scattered across it. Everyone knows someone who knows someone in Texas or Florida, Puerto Rico or Nevada, or wherever the latest apocalyptic event is unfolding. And one of the side effects of being on social media a lot is that I learn about the experiences of an extended web of people, like the friend’s brother who posted pictures of the rising waters around his neighborhood in Houston when Hurricane Harvey slammed into the Texas city in late August.

Then Hurricane Irma pounded into Florida in early September. This one was personal; with an aunt and a cousin on the east coast of the state and a sister-in-law in Fort Myers on the west, I spent two days obsessively updating the Weather Channel radar and hunting down news stories. The sister-in-law decamped to a hotel and her college-age son flew back here to Pennsylvania for a few days after his central-Florida campus was evacuated. Fortunately, even though Irma made landfall right over Fort Myers, their home was unscathed and the power came back on after a couple of days.

But then came Maria. And the contrast between the pace of the recovery effort in Florida and the one in Puerto Rico is mind-numbing.

One of my friends is originally from Puerto Rico and while her immediate family all live around here, her extended family are in San Juan. Two days after the devastation of Maria she’d had confirmation that everyone was OK: “Well,” she said, “everyone’s home is damaged or destroyed but thank God they’re all safe.” She then told me about friends who were frantically trying to find a flight back to the island, to check on family members they’d been unable to reach. Now, it’s been almost three weeks and many are still without power, running water, or basic transportation. 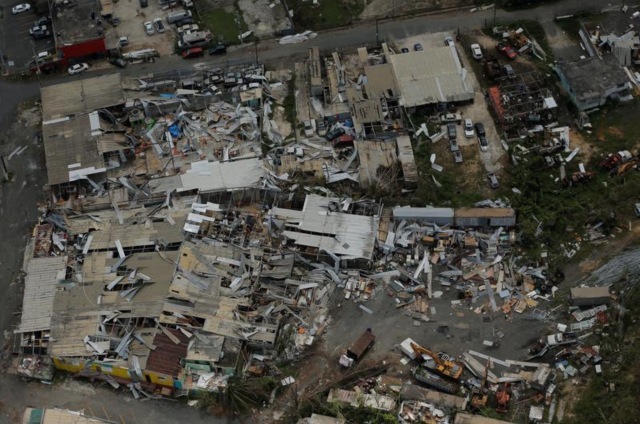 This is a Reuters wire photo showing some of the devastation.

A few days ago I was at our local FedEx office (a private mailing company) to ship a gift to someone in New York. A young woman came in with a big bag of stuff: “I need to send this to Puerto Rico.”
“Well,” said the agent, “We can ship to the island but not deliver. Your recipients will have to go to the central collection point, do they know that?”
“Yes,” said the young woman wearily, “I’ve been doing this for days now. They know what to do.”

I looked over at the bag she’d placed on the counter: boxes of instant-use cold packs and antiseptic wipes, and cans of spray cleaner. Just imagine the story behind the need for those items. That’s when it really hit me — that in the 21st century 3.5 million citizens of supposedly one of the most advanced countries on the planet were dependent on what distant relatives could send in the post because the federal government just couldn’t (wouldn’t?) get its act together.

A couple of days ago Hurricane Nate came ashore along the border of Louisiana and Mississippi, but without the extreme impacts of its three predecessors there was almost no national news coverage, just some cursory stories about “heavy floods.”

Meanwhile, there was the earthquake in Mexico City on September 19. Not part of the USA but again, many people have family and friends there and there was heavy news coverage. That evening my 17-year old showed me a video shot by one of his young friends who lives in the city: two hours after a practice earthquake drill the sirens had sounded again, this time for real. She’d run outside to safety and caught a video of a building, maybe 4-5 stories tall and a couple of blocks away, that crumpled to the ground in seconds, billowing dust and debris. (The only earthquake I’ve ever experienced was in August 2011 when a 5.8 quake in Virginia sent its ripples across the eastern States. Here, it was just a prolonged rumbling that rattled the dishes in the cabinets and confused the dog but even that was pretty unnerving; a full-blown quake must be one of the most terrifying experiences imaginable.)

And then came Las Vegas. The worst mass shooting in US history, 58 dead and nearly 500 injured. I have a young friend who moved to Vegas last year; she was nowhere near the strip that night but she described the atmosphere in her classroom the next day, trying to find something reassuring to tell her 7-8-year-old students, many with homes just a couple of blocks from the strip. Another friend told me that her husband, a country music fan and gun owner, was weeping in despair as the news unfolded, devastated by his helplessness in the face of this carnage.

A day or two later I caught the tail end of a press briefing where someone in law enforcement said something like ‘we’ll be going back over everything to try to figure out what we missed, so that we can try to stop something like this occurring again.’ Because God forbid that anyone should wonder why a private citizen had amassed a veritable arsenal of powerful weapons in the months before the attack.

The shooting happened on October 1 and yet already the story seems to have faded from the news cycle — aside from breathless conjecture about the gunman’s motives and what the Mandalay Casino may do with the suite he used. There was a brief flurry of attention to the ‘bump stock’ that the killer used to modify his (perfectly legal) semi-automatic to make it fire like a full-blown automatic. The picture above is from a Reuters wire story on this. And gun control groups tried yet again to say, “This is not normal! We have to do something!” But the media frenzy has already moved on.

Now, the focus has shifted to the wildfires raging across California. Yet more apocalyptic pictures are filling the news feeds; yet more stories of devastation and loss, interspersed with incredible acts of heroism by first responders and by ‘ordinary people’ who have been caught up in something appalling and find themselves acting in ways anything but ordinary. This is just one screenshot from a social media account. 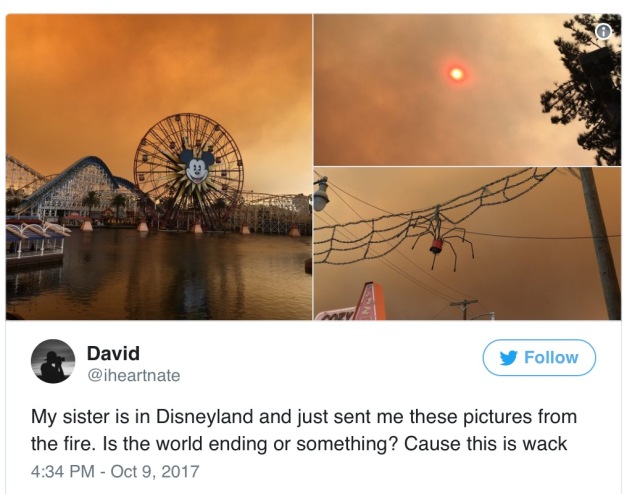 The firestorms are so bad that the smoke plumes show up in this picture from NASA, taken from the space station.

And I haven’t even touched on the craziness coming out of this administration. I fear that the constant pounding of dire news, along with the constant cries of “He said WHAT??” in reaction to the latest bile coming from the president, is starting to beat us down. On October 5, at an evening photo op with various military officials, Trump said this was “the calm before the storm.” When a reporter asked, “What storm, Mr. President?” he replied, “You’ll find out.” No-one knew what the hell he meant and the meme-makers had a field day with it on Friday morning. But, where was the outrage? How is this normal?

There’s just so much awful going on that you can’t react any more. Irony has pretty much given up and gone into hiding. This was the front of the New York Times website on October 10. Note the juxtaposition of the two main stories.

Ever since the election last year, the Spouse has insisted that we’ve somehow crossed over into an alternate universe where everything is out of whack. Like the TV show “Sliders” from the 1990s, he keeps wondering where the wormhole is that will take us back to the relatively-sane universe we’re supposed to live in.

An expat Brit who's lived and worked in the USA for more than three decades.
View all posts by abroadintheusa →
This entry was posted in Uncategorized and tagged AmericanLife, Earthquake, Expat Life, Hurricanes, Las Vegas, wildfires. Bookmark the permalink.

2 Responses to Update from Apocalypse Central