Posted on October 22, 2018 by abroadintheusa

Americans are very proud of being a democracy—”land of the free” and all that—and voting is the bedrock of the democratic system. So why, in this most vibrant of democracies, is the actual act of casting of a vote so difficult?

To start with, you have to get yourself registered. This might seem obvious to Americans but in countries like Chile, Israel, and Sweden (and many others) you are automatically registered when you hit 17 or get a national ID number (the equivalent to an American social security number). In America, you have to fill out a form and provide proof of residence and of citizenship.

If you move, you have to submit a change-of-address form (your polling place will likely have changed) and if you’ve moved to a different state you have to re-register all over again. This may not seem like a big deal but remember, America is a migratory place where a lot of people move across town/state/country. According to research at FiveThirtyEight, the poorer you are, the more likely you are to move—non-whites also tend to move home more often than whites. Which raises all sorts of questions about who is more likely to vote.

Back to registration. One of the questions asked on the registration form is political party affiliation—Democratic, Republican, Green, Libertarian, None, or Other are listed on the Pennsylvania form. This is so that you can vote in a primary. (If you pick None, you won’t be able to vote in any of the primaries, and I have no idea what “Other” might include). The specifics of how primaries work and when they are held varies by state but basically, it’s when the voters choose the candidate who will stand in a local, state, or federal election on the particular party ticket. Primary elections are held sometime in the spring and full elections in the fall.

I live in the state of Pennsylvania. Back in May, the state held its primary elections, to choose who the respective parties’ candidates would be for the five state and federal elections coming up next month. On November 6 I’ll vote in the general election (same date across the country). These are called “mid-term elections” because they fall mid-way through the four-year presidential term.

So, I live in Montgomery County, a mostly-suburban area just north of the city of Philadelphia. My polling place is a local church hall. Below is what I will see when I get to the voting booth in on November 6. The Pennsylvania governor and the (federal level) senator are chosen state-wide. In addition, I’m in the 4th congressional district (federal level representative), the 154th district for the state assembly, and the 4th district for the state senator. Yes, it’s a bit confusing, with all the different districts and levels of government, but this is actually a pretty straightforward ballot with just five offices to vote for.

All voting in this part of Pennsylvania is done using an electronic machine. Across the state and the country as a whole some places use paper ballots; at my polling place the machines look like this: 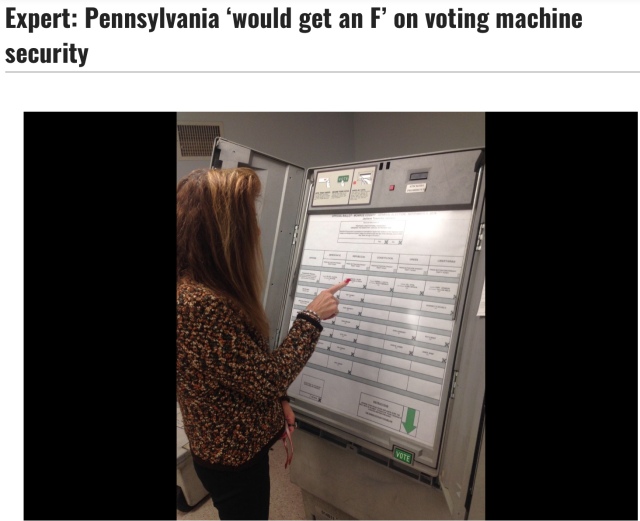 This is a screenshot from a recent article in the Intelligencer (a Montgomery County newspaper). Note the headline. Not all voting machines are created equal and some are more secure than others. It’s still up for debate whether there were vote manipulation and machine tampering in the 2016 elections but for sure the system is way less secure than it should be.

So, there are a lot of things to vote for and getting on the register can be a hassle but otherwise, the whole thing looks relatively straightforward, doesn’t it? Well, not so fast. The upcoming vote is for a general election; these are held every two years in even-numbered years. Aside from the presidential elections, which are held every four years, exactly what you are voting for will vary—congressional and state representative elections are every two years, but the state governor and state senator elections are every four years, and the state’s two federal senators are elected to six-year terms (and not at the same time). It gets really confusing trying to remember what you are supposed to be voting for each time. And this is just the even-numbered years.

The odd-numbered years are used for local and municipal elections. Back in May and November 2017 the Pennsylvania primary and then full elections were held for various judges—magistrates, court of common pleas, commonwealth court, and superior court—along with local school boards, councils, mayors, tax collectors (yes, really), and election judges. I pay close attention to local races like the school board and council, but how am I supposed to choose judges? I’m not even clear on what the various courts do.

It sounds great, getting to exercise your citizen’s right to vote at so many levels of government—but the reality is that, with so many things to vote for every six months, most people don’t bother. Voter turnout in the USA has been declining steadily since the 1960s. In a presidential election turnout usually hits around 60%. Standard turnout in a mid-term election like the one next month is 40% of eligible voters; in odd-year, primary and local elections turnout averages around 20%. For comparison, in the likes of Sweden turnout regularly comes in over 80%.

And, young people are the least likely of all to vote. Close to 50% of Americans aged 18-29 voted in the 2008 presidential election—the first year that Obama ran—but the usual number is around 30% or lower.

All of which helps to explain the massive efforts currently underway to “get out the vote” for next month. Younger Son’s university campus (in New Jersey) has sponsored a big “Vote100” effort to try to get all eligible voters registered and signed up for absentee ballots. Older Son reports “all” of his friends on campus (in Maryland) are comparing notes on how to get an absentee ballot for their respective states. Both have been incensed by what they see going on in American politics in the past two years, and I’m proud to report that both mailed in their requests for absentee ballots last week. Whether they get them in time remains to be seen—there were numerous reports of our county absentee ballot system not working in 2016, including Older Son who never did receive his.

Theoretically, you stay on the registration list until you file for a change of address or to register in another state. But, in recent years there have been reports from across the country of people finding they’ve inexplicably been dropped from registration. There are plenty of ways to check that you’re still registered, but you’d only know to do that if you’re paying attention to e.g. social media.

And then there are the reports of outright voter suppression. As with many of the problems in America, this is mostly a function of racism. This article in Slate highlights some of the most egregious examples underway right now, attempts by Republican incumbents in Georgia, Kansas, and elsewhere to dis-enfranchise “minority” (i.e., non-white) voters.

When you look at what’s happening on the American political scene right now, it’s hard not to conclude that voting in America is a flawed process that can lead to deeply flawed outcomes. The only thing that might save us all is if those 18-29-year-olds do, indeed, channel their rage into the ballot box.

An expat Brit who's lived and worked in the USA for more than three decades.
View all posts by abroadintheusa →
This entry was posted in Uncategorized and tagged AmericanElection, AmericanLife, Elections, ExpatLife, Midterms, Pennsylvania, Vote, Voting machines. Bookmark the permalink.