Posted on October 30, 2018 by abroadintheusa

I’m cheating a little here and posting an update of last year’s piece on Halloween in America, with a few new pictures from the neighborhood. As usual (almost) everyone is getting in on the preparations; every other house in the neighborhood has some kind of decorations, indoors and out. Skeletons seem to be a dominant theme for 2018.

As I’ve noted before (Happy St. Patrick’s Day!) Americans love any excuse to get dressed up and party. So, the stores are full not just of costumes for kids who plan to go trick-or-treating (superheroes, princesses, and monsters etc.) but also for adults heading to a party (sexy cop/nurse, and even scarier monsters). You can buy everything from cheap blonde wigs to vampire makeup kits; plastic skeletons to hang by the front door to fancy animatronic displays that light up and move every time a hapless kid runs by looking for candy. I read online that Americans spend over $5 billion dollars annually on Halloween, making it the country’s second largest commercial holiday. In addition, a quarter of all annual candy sales occur during the Halloween season.

In the streets around us, decorations vary from low-key plastic pumpkins and “ghosts” made from sheets and old soccer balls (guaranteed to spook my dog whenever we walk by and the wind blows), to truly epic masterpieces. There’s one house that is covered every year in massive spiders (I couldn’t even take a picture of that one; shudder). 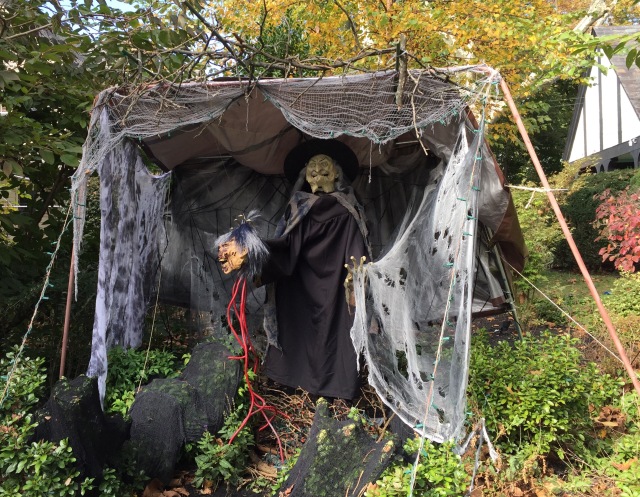 This is one of the best ones I’ve ever seen: a bunch of skeletons playing basketball! 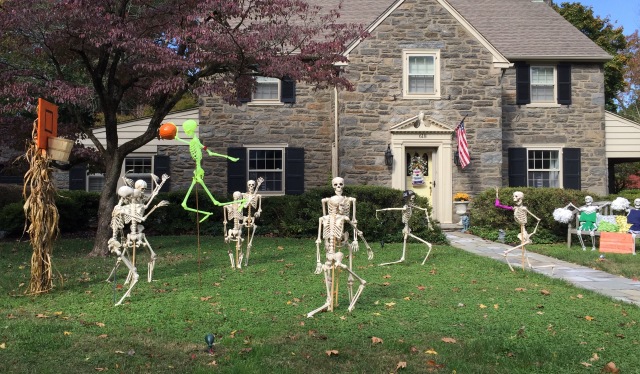 The Saturday before October 31 our little town’s business and community organizations put on events for the kids. There’s a “Scare in the Square” in the local town square, where kids get to wear their costumes, enjoy themed games and face painting, and collect treats; and local shops that display a “pumpkin paw print” will give out treats to kids and their pets.

I said “almost” everyone joins in; those with strict religious views don’t approve of the spooky shenanigans. Our youngest attended a Jewish daycare center when he was a baby; we were told very firmly not to send him to school on October 31st in any kind of costume because “Halloween is a pagan observation.” I also know of a couple of Christian families whose kids take no part in anything to do with Halloween because it’s “satanic” and unholy. I’m not sure how they come to that conclusion, given that Halloween is literally short for “All Hallow’s Eve,” meaning the night before the decidedly-Christian All Saints Day, but to each his own.

The weather forecast for October 31 this year is for a mild, dry evening, which should mean we get plenty of trick-or-treat kids showing up as the sun goes down. The record was close to 100 kids, but in recent years it’s been around 50. Some people give out bars of chocolate or pretty little gift bags filled with treats. The lazy among us (like me) buy big bags of Halloween candy — basically, mini-versions of popular treats, often in Halloween-themed wrappers — dump it all into a big plastic cauldron, and tell each kid to just grab a handful. The little ones carry plastic pumpkins or little treat bags to fill; teenagers are not ashamed to haul around pillowcases to gather their loot. 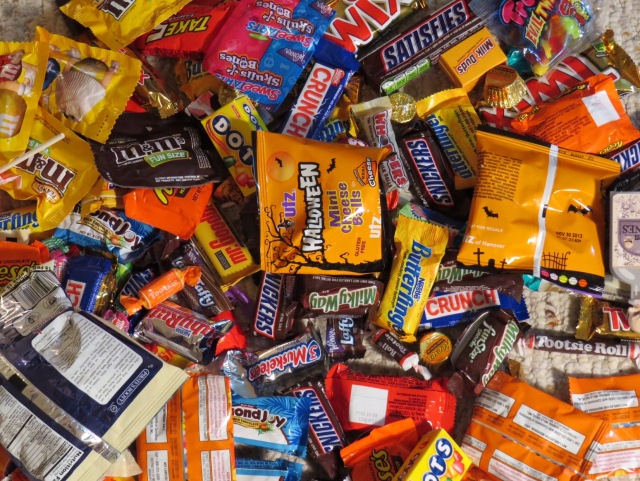 The deluge usually starts at dusk, around 6:30pm, with the little toddlers, often carried by a parent. As the evening wears on, more and more show up at the front door, usually in groups of 2-10 kids, sometimes with a parent or older sibling in the background. By 9:00pm it’s pretty much over, with just the odd bored teenager showing up; their costumes no more than an attitude that says “costumes are lame but I still want candy.” If it’s been a busy evening they’ll be stuck with the leftovers that no-one else wanted (sticks of gum).

By the end of the week, the shops will have replaced their Halloween candy and decorations with Thanksgiving-themed treats and turkey-shaped table decorations, and some will start putting out the Christmas stuff, too; including the little plastic Christmas trees that will be everywhere by early December. Maybe someone should tell the strict born-agains that the Christmas tree is a pagan symbol.

An expat Brit who's lived and worked in the USA for more than three decades.
View all posts by abroadintheusa →
This entry was posted in Uncategorized and tagged AmericanLife, Candy, Halloween, halloween decorations. Bookmark the permalink.

1 Response to Halloween in America: Candy, Costumes, and Crazy Decorations